Welcome to The Floppy Preservation mine!

Do you remember your first Commodore 64 Floppy that held your special valuable Data content? I sure do. Mine was an ABC Floppy that came in a 10 pack. Still today that floppy is working but for how long will it? That's the question we should ask us when thinking "It's been working for ages, it will work forever". When the price started to sink due Commodore sold more and more VC1541 it was a media that took over the Tapes. The data stored on a Floppy could be easier accessed and the possibilities to add managment it was easy and better than the process to hunt for Data on Tapes. But as with Tapes, Floppy Media and most importantly of all the Data is getting old and weak - time to preserve the precious Data into Digital Media, before it's too late!

Track and Sector 1
Like said, the interests for floppies started early for me as I was(still am) a lucky owner of a white fine VC-1541. This drive is dated from 1982 and even today it spins like a kitten. One can say even if the drive went to parties, schools and yes gosh know where! The fundamental rule was to treat it with care and love. Yeah. it's always been part of me. To treat equipment fair and respectfully. I was probably the first one at school to own a Floppy Drive and it fascinated all my friends, literally drooling in the Floppy box and how fast it was to load games.

Speaking of games. One of the first games I got to play was, "Congo Bongo" and it was such a thrill to look at all the files on the floppy even if I had no idea what they did. I guess the File Names gave my mind thoughts and ideas. 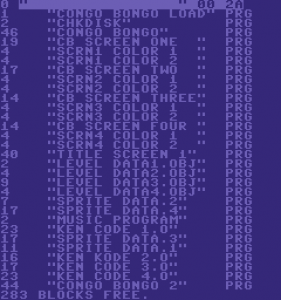 Still today it gives me a warm feeling to look at all the files and know this was practically it! The thing that would lead me to the spot where I am at today. The game itself was really tricky to play and fiddling around I think I never really completed the game. But yeah that memory is still there.

Games and Loaders
I wasn't really aware of the Loaders and Copy Protections worked. Most because the happiness was to get an Original Game and enjoy the complete feeling to it.
This also was a difference maker between Tape and Floppy versions of the same game. Many times the game loaded fast on floppy but it did not have that nice Loading Music of Loading Picture. That was something I missed. Also the Floppy versions of the exact same game was twice the price! It made me think twice before I actually bought a game.
Even if the feeling to fast forward and rewind Tapes and get the counter do a specific number could sometimes be very frustrating. I mean to play "The Last Ninja" on Tape was awesome in a way but the waiting was a bit too much when you just wanted to reach for a new level and not have to spend the lovely time to load each levels and screen.
This was also when I got myself a Cartridge that could "Freeze Save" and create a full copy of the C-64's Ram. Saved me lots of time and efforts to get things right.
But yeah some games did not allow this to happen and it was a lost path in the mine! The only way to solve those "Freezer Protections", was to retain more information and knowledge how it works. I brought some books about the Commodore 64's hardware and VC-1541. This was an opening to me. The small quests started to get small answers. I still have the books somewhere and when I find them I will post pictures. I think it might be a scrapbook somewhere with small routines etc.

The journey
The complexity started to take place around 2009 when some of the preservers started to release their collections to public and made archives more easy to get. I am sure this was already shared as "internal goodies" but for me it was like to open a timecapsule! I got super excited. Even if I had done some archiving of Amiga Games, Demos, Modules and Sourcecodes. This was something else. and really huge for me. Very soon I got this idea "save for the future",8,1. This personal project was to save all and everything I possible could get access to. and Build up a bit of a database of what I had collected. My main focus was to preserve anything SID related. It brought up an idea to make videos or well as I like to call them, "Player Screens". The concept was to make a nice presentation for my SID Recordings. I wanted to make something nobody else had made and make it good.

First was to transfer SID music to the C-64 and record it. Then to analyse the tune. The final step was to make the "Player Screen". Nice and stylish. This was a major success! I had good response. The SID Recordings stood out from the rest. Finally I had established lots of connections and started to dig out more than SID music from the preserved Data. I got access to things never seen before and indexed lots of awesome Data.

Preserve for the Future
This is where I am at this point too and also why Floppy Preservation is so important to save our legacy to the future generation.