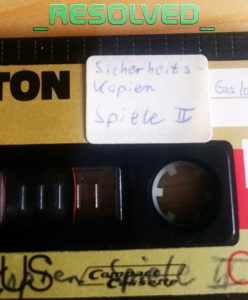 Foreword: Back in 2016 I recived a bunch of German tapes and floppies bundled in a pretty huge sending.One of the tapes caught my eye when I noticed “Security Backup”, written in German. There is something about words like that. Always seem to trigger something inside my brain, like a spark of something.
“Just that spark to get me going”, like an ignition.

Phase I
The first thing I did was to read the tape with a tool called ”Spectacular”, just to determine what kind of data we were dealing with.
The first result was decoded as ”TurboTape 250”-format. However it kept giving me errors and yes it seems to not be the standard format due many reasons.

Implicated reasons:
-Startaddress failed $0801 – allocated at various points in different files parsed equal names
-no checksum
-turboformat missleading as ”Anirog/Anirog Tequila)
Those reasons were enough for me to skip the tedious work analyze all commonly used TurboTape formats and variations. It just did make nosens at all.

The Spectacular process:
When it comes to analyse data, we have to start with the essential steps, to get a successfully data, the head must be aligned as showen. 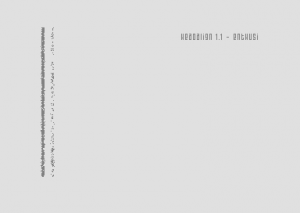 To map out the data, I analyzed it from a bunch of “structural” perspectives and came up with a theoretical structure, that somehow made sense. 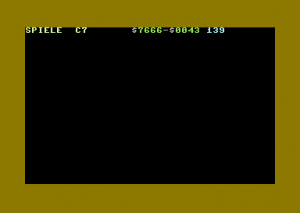 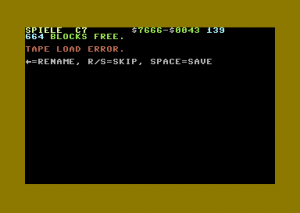 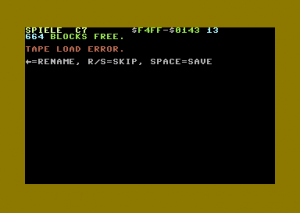 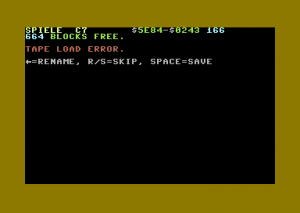 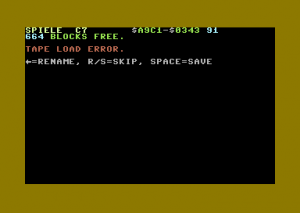 If we look at where the files are loaded to, meaning the endadress. There is a bit of an indicator we have a sequential structure here! But nothing really can be concluded without decoding the data.

The first result was decoded as ”TurboTape 250”-format. However it kept giving me errors and yes it seems to not be the standard formart due many reasons.
Implicated reasons:
-Startaddress faild $0801 – allocated at various points in different files parsed equal names
-no checksum
-turboformat missleading as ”Anirog/Anirog Tequila)
Those reasons were enough for me to skip the tedious work analyze all commonly used TurboTape formats and variations. It just did make nosens at all.

Phase II
Now to try analyze what kind of backup program was used to write those files from tape to floppy. I had a theory due the file structure each of the files were part of a standard 35tr floppy. This due to the size of the images but also due the content.

Phase III
The analyse of the most commonly used backup-programs used during the 80s when people still were using tape, for backup-stations.
Got me to the following isolated programs:
-Copy 190 V1/V2
-Copy 235
-Copy 236
-GigantCopy V1.0
-Turbo Tape Copy
This was going to be a long process with lots of frustrations and keystroking. But I really had no choise than to go this road and ”get things right”. 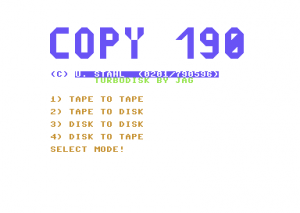 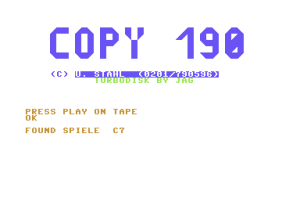 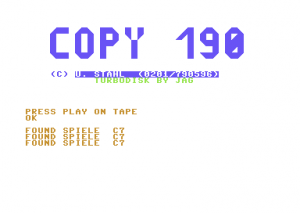 As we can see, it first scanned and found the correct filename, but it sure did not save to floppy. It just scanned till reaching the end of the tape and eventually crashing. So No go here. Eventhough, I did try re-read this four times, ended up same result. 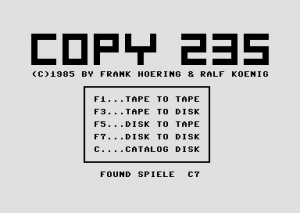 Same result as with Copy 190. But this version did not even want to continue after the scanned name was found and loading. It just crashed sent me back into space. To be on the “sure side” and keep up to the evident method I re-read this four time again, ended up same result. 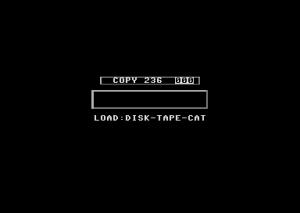 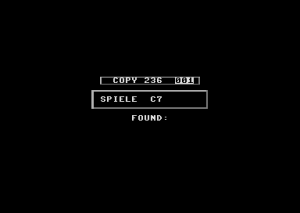 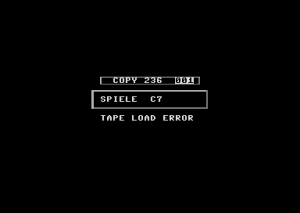 At first this gave me quite some interesting results, which I wasn’t able to reconstruct for this particular documentation but since it did not resolve any results I consider it nonsignificant. As we can see “tape load error”. But as mentioned above I read the segments four times, ended up same result. 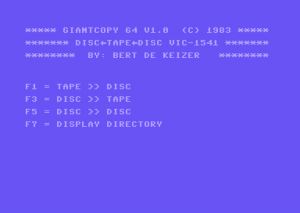 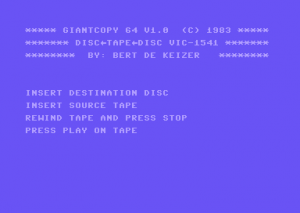 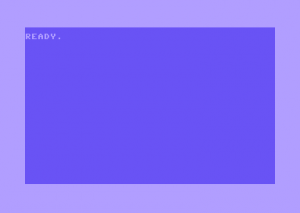 Gigant Copy V1.0 did not even detect the filename, it spat in my face, crashed and burned. However, I did re-read four time, ended up same result. 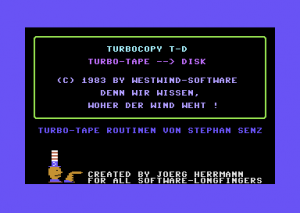 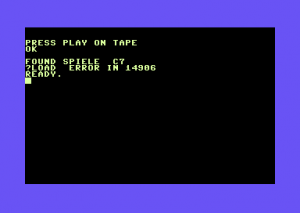 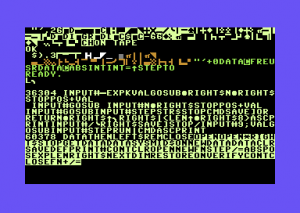 Now, TTC was kind of my last hope before I was out of ideas. Most because it’s a German program and yes I actually found a copy of this on the included floppies, which really gave hope! Even if I did try the parameters and re-read four times. The result was the same. Error and error and no go. Of course I re-read four times, ended up same result.

Conclusion:
After trying all those back-up programs I started to lose hope on this but as always I did not want to give up. See, give up is a word far away for me. I was still sure “the truth is out there”. But yeah I also felt I might trow out the question if anyone would know and actually present the Data Archaeological research I did! The response were far from what I did expect, they were overwhelming! I really felt the love and enjoy. Which triggered the hunger to tackle this beast one more time, but perhaps not now.
One of the first to response was Sailor of Triad. He and I bounced many ideas and well we were on the same path to come up with a solution. However, he did an overdrive which could present the actual data and encode the structure! Now this was amazingly news! I was impressed and felt happy to at least be able to “decode the data” and have it written to .d64 images. However, we both were curious WHAT IS THE NAME…

Phase IV
One evening when preserved some floppies I came across a program called, “Bit Convoy”. The name made me curious because for some reason a vague bell rang in my head telling me to go back to a non closed case! I thought, “yeah okay let’s give it a go…”. Really did not know what to expect.
Once again I dug up the data-files, loaded “BIT CONVOY” from floppy. 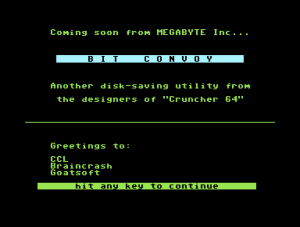 This really looked interesting and I was curious to see what was going to happen next. 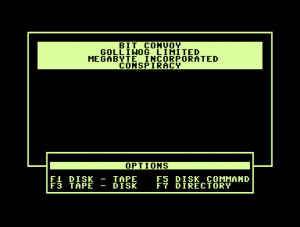 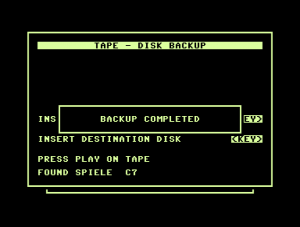 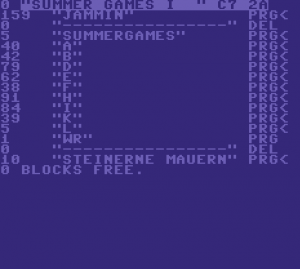 Mission accomplished! That was it! Now, I had done it and resolved the mysterious program used to write those files from floppy to tape!
and Yes the rest of the files could be read and written back to floppy 100%. 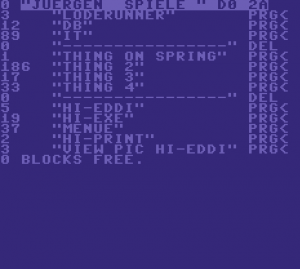 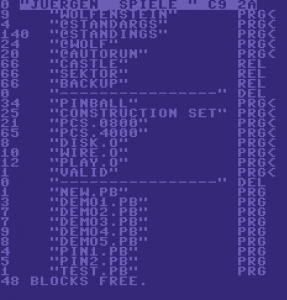