As we discussed the player is the layer that take care of Envelopes, Sounds, Filters, Modulators and Notedata, that construct the music heard from the SID Chip.
Access the player can be done differently. One way is to execute the actual Music Routines and work in MCL, but this is for many very advanced and not the most efficient way to work. Well, it has some advantages as well. If you really want to have 100% control and optimize your songs for specific needs, this is the way to go but it requires programming experience and knowledge how the SID Chip and CPU is working. This is why there are frontends for the Players and Music Routines, called Editors and Trackers.

Trackers
The trackers was a complement to all the Editors. This was because some musicians did not want to work with duration and use command to compose music. Sometimes you are more visual and want to "see" what you're doing and keep track on the notes in another way than an editor do. In other words, the workflow is different.
Technically speaking a Tracker is working the same way as an Editor, since they both use a Music Routine and Player.

Let's dive in
How does a typical tracker looks like? 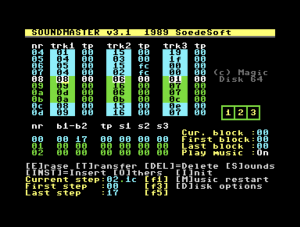 One of the first trackers on the market was "Soundmaster V3.1" from SoedeSoft. This was used not only by SoedeSoft and FireEagle, once it was released. The base sounds and sound design was unique for this Tracker and to begin with it kind of set the "Soede Signature". This tracker did not use the typical C-1 notes, as discussed in the Editor part. This was far different and used hexadecimal values that corresponded to notes. 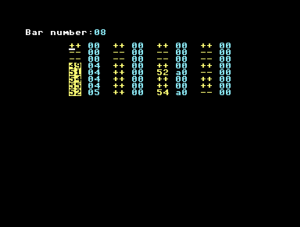 Quick follow-off. The bone structure if I remember correctly(last time used this Tracker was around 1989 or early 1990).
The first two bytes: Octave and Note
The second two bytes: bit and sound number. The bit $80 was for portamento and you could press the commodore key to assign up/down
The third bytes to access sustain (++)
The fourth bytes had something to do with cycle time and filter triggers. Sorry I can't remember it all 🙂
Anyhow, this note style was kind of simple to use and I was able to clove up some tunes. 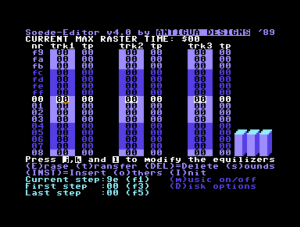 The next step and successor to "Sound Master", was "Soede Editor". The GUI was bigger and it added more possibilities to the Bar Editor, as well for the Sound Design. I didn't spend too much time with this Tracker, but the foundation was the same as for all Soede's Editors. 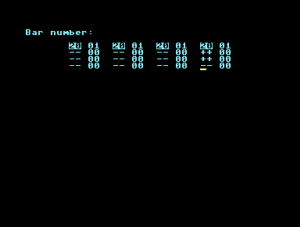 Even if the Bar Editor looks smaller it had some additional workflow, if not mistaken it was possible to define Bars to be longer and not locked to 4/4 per Bar. 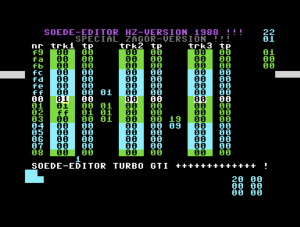 Many big groups wanted to make their own special versions and it was very often done by "hacking" or "improve" the official versions. 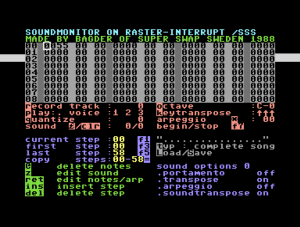 When speed matter, you need to be clever, right? 🙂 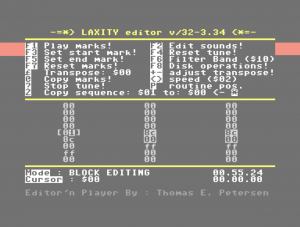 Next up and the biggest breakthrough was when Laxity/Vibrants/Maniacs of Noise, released songs made with his own editor, "Laxity Editor V/32-3.34". Now music got seriously good! He really show what the SID chip was made of and it just didn't sound half done, it sounded brilliant! Many composers were curious how he made this and how it was possible to make such sounds. The editor is very hard to get anything out of, unless you know how to work it out. Laxity himself did never write a full documentation, as it was never intended to go public. 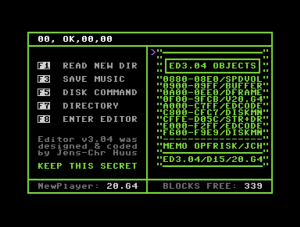 This inspired JCH to make his own editor. He did this after Laxity told him to not use his editor anymore, because he made some really awesome tunes! Of course this was in a friendly aspect but yeah JCH sure took Laxity's words on this and created his own "JCH Editor". This so called "system" became powerful and had a special feature to merge different players into the actual editor. The players had different purposes and needs. Some were good for Rastertime, some were better for multispeed songs and some were more generic for all purpose. The most known "New Players" used are: 17.G0, 20.G4, 20.Q0. The Q-series stands for quattro and is used for multispeed songs. Many coders and composers took the step to write/improve their own "New Players", since JCH was kind enough to release the source code for his players. Still today this is considered to be one of the best Editors out there! and Yes it's called Editor, even if it uses the Tracker technique.

Tracker style
We have now discussed the basic principles of how different Tracker works. The difference between "tracking" and "programming" is simple. Let's have a look. A modern tracker is divided in Tracks, Instruments, Disk menu and Packer. The tracker part is where you arrange your tracks into a song. The Instrument part is where you define an instrument and the Disk and Packer is for finalizing the song and save it. Recently we learnt about durations, slides, glides and some other commands. But when working with Tracker it's a bit different. The tracker-style was invented in relationship with SoundTracker. You can say instead of program the music, you now can paint the music. Each track are indexed with notes and lines. The notes are as described before the tone, while the lines or separators are silent blocks, used to define how much silence there is between two notes.

So the "separators" fill out the time. But the end result is the same.

Tracker commands can be used after a note or in the next row. Most of the commands are individual for each Tracker but consist the same principles. Side up/down, Portamento,Glide/Slide, Volume etc.
Instead of trace a whole selection, we can now all to the same line. Many of the Trackers also started to get inspiration from the PRO Trackers developed on Amiga and Atari. So sometimes the commands were "equal" to keep up to the generic standard.

More Trackers
Even if The JCH Editor is a powerful tracker the workflow sometimes confuses the users who are used to ProTrackers and more "modern" trackers. This took a turn and some groups and coders made their own modern trackers. 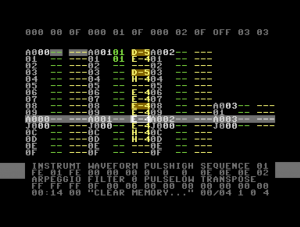 SDI is one of the sharpest trackers out there. It has lots of nice features that really stands out from the rest but also yet powerful and very fast. You probably would expect this from two brilliant coders and musicians who has been in the game from the start. GRG and GT. Those two genius put lots of energy to make this tracker. Based on GT's routines GRG took this tracker steps ahead. Thousands of tunes has been made with this excellent tracker. 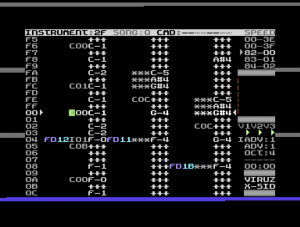 XSID V2.3pre was made by Jeff/CML/Virus. He has made many great players and editors in the past and this was to be his "best" tracker ever. Unfortunately some less smart person spread this tracker to public, which resulted Jeff to stop working on it and work on a newer tracker called BullSID. More info will come, when he hands it out 🙂 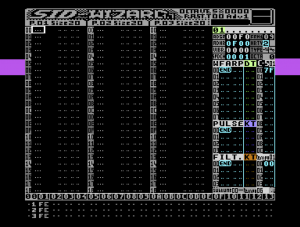 SID-Wizard V1.7 by Hermit, has really set the standard today when it comes to make SID on a native Commodore 64. SID-Wizard was inspired from the SID Tracker "Goat Tracker", that was released on PC and MAC. But SID-Wizard also merged lots of style from both DMC, and JCH. With all this carefully weight up this has very fast become many musicians favorite Tracker. Most because it reminds of the PRO-Trackers on Amiga and Atari and it also has a bit of the same workflow as "Fast Tracker" on the PC. The screen is very clear and structured. You can tab around in patterns and song -mode without going into different screens. Also the instruments are easily seen on the screen, leaving plenty of space for editing notes and additional info. I would say this is a brilliant and well thought through tracker!

Conclusion
Even if most of the Trackers are similar to Editors, however the workflow and layout is different. They are basically the same because they drive the player just the same way. The Tracker might be easier to understand if you're used to PRO-Tracker, while the Editor might be easier to understand if you prefer to work in a more logic way. When I say logic I mean the way it is constructed the way you control notes with commands and numbers, than in a Tracker when you have a graphical view. Like said before. The commands are almost the same in Trackers and Editors. However, they differ in terms of how they are executed. A generic Tracker allows two lines of effects per line, at most. Meaning you might only set the volume and have vibrato. Of course there are Trackers with special commands to get around this, but for this comparency let's go easy. To compare this example with an Editor you can in some cases stack up up to six effects per line. Both ways have their quirks. When stacking up lots of effects the CPU/Raster Time will go up and cause the player to do more work and reduce Raster Time for other things and sometimes the player can get out of sync. So as composer you must keep this in mind.
/Xiny6581